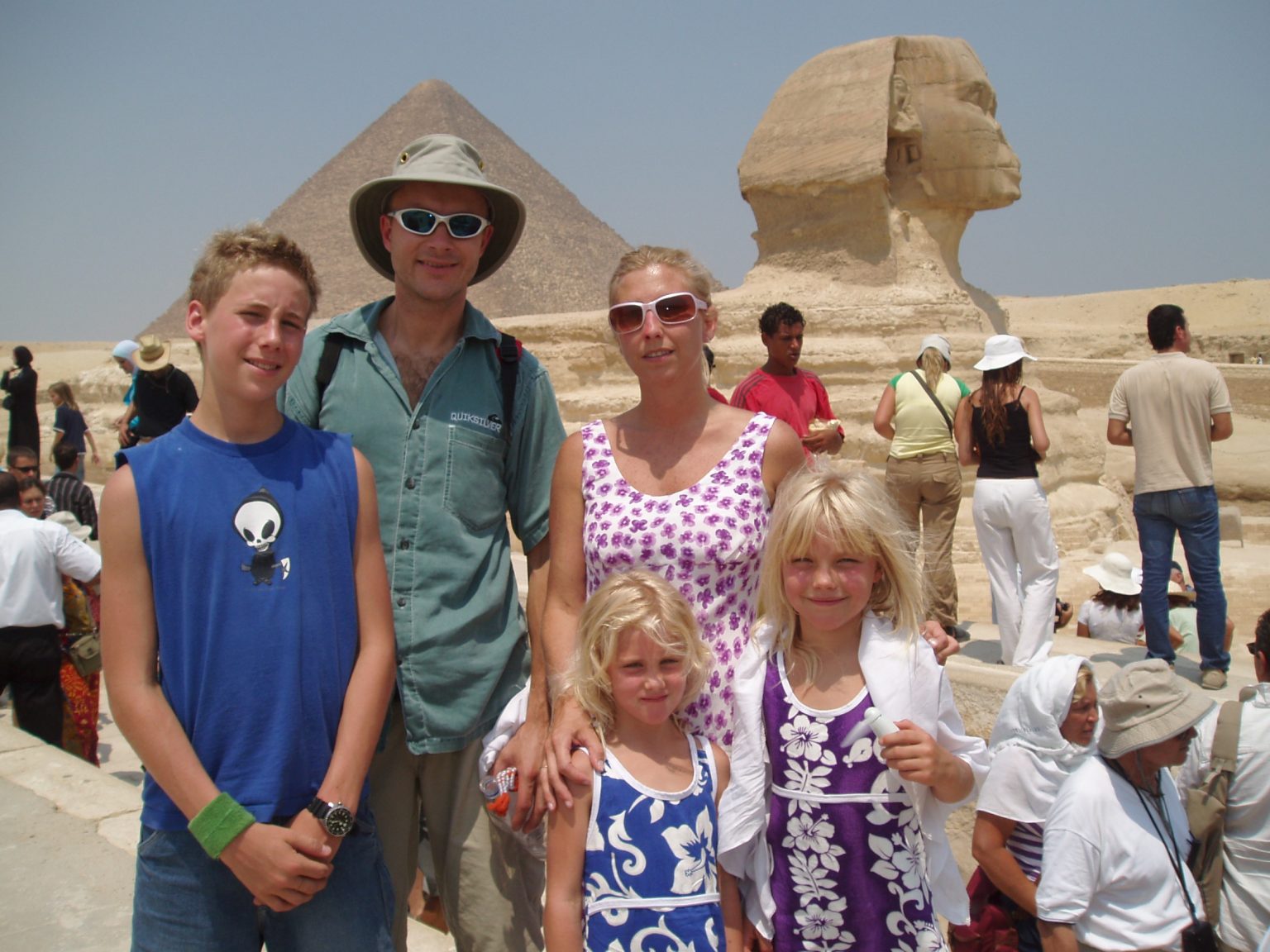 Cairo, Egypt’s sprawling capital, is set on the Nile River. At its heart is Tahrir Square and the vast Egyptian Museum, a trove of antiquities including royal mummies and gilded King Tutankhamun artifacts. Nearby, Giza is the site of the iconic pyramids and Great Sphinx, dating to the 26th century BC. In Gezira Island’s leafy Zamalek district, 187m Cairo Tower affords panoramic city views.

Our family of five (Trent 14, Charlotte 7 and Caitlyn 5) and Pete boarded the 7h00 British Airways flight to Cairo from London Heathrow. This was Trent and my second trip to Egypt – we had travelled there in April1993 with Oupa when Trent was 2 years old… The flight is just under 5 hours. We completed immigration forms and after about 30mins cleared customs and were met by the pre-arranged 7foot tall taxi man who transported us to the Windsor Hotel as booked but then demanded additional baksheesh – all very chaotic with a stop en route where he proceeded to get out of the taxi and undertake his call to prayer on his prayer mat on the actual road along with several hundred other vehicles who had halted to do the same thing! Quite a welcome to this crazy, bustling City!

I quote from Trent’s diary (aged 14 at the time): “Now my Mother, who has travelled the world in all its poverty and splendour did not decide on the usual 5 star luxury but had decided to be adventurous and go for a 3 star …which would have been absolutely fine …. if you lived in the 1950s! Everything was really old technology wise, which really creeped me out…” I had actually chosen the Windsor Hotel after watching Michael Palin’s Around the World in 80 days when he stayed there. It had served as a British Officers Club in the First World War and the furnishings date to this period. The Windsor’s manually operated wooden carriage elevator is the oldest in Egypt and among the oldest of its type of elevators in the world! The place oozed the atmosphere of a throwback to 1910-40’s Colonial Cairo. Old books and gramophones tell the tales of Cairo in the first half of the 20th century. The barrel bar was fab with British items like finger sandwiches on offer along with the obligatory G&T – Fun! The rooms were definitely Shabby Chic but as it was very reasonably priced one could not complain! It closed in 2019 for refurbishment but has not yet opened its doors again and remains closed.

We only got to bed at about 03h00 and fell straight asleep in the musty beds. At 05h00 the Morning Prayers woke us all up and we couldn’t get back to sleep. After an appalling breakfast we got a taxi with a charming old ‘Samir’ who took us to the Mosque-Madrasa of Sultan Hassan which was built between 1356 and 1363 by the troubled Mamluk Ruler who took the throne at 13 but was assassinated before it was completed. The tallest minaret is 68m!! I had to wear a green cloak over my shoulders. There were amazing carpets but it smelt of smelly feet as you are not allowed to wear shoes and only your socks inside.

We then took a taxi to Giza to the the Pyramids and hired a guide and camels for a tour.

It was amazing to see the pyramids again – absolutely awe inspiring. Their size is phenomenal. The children really enjoyed the camel ride despite them being grumpy and spitting at us! The Great Pyramid of Giza is the largest Egyptian pyramid and the tomb of Fourth Dynasty pharaoh Khufu (Cheops). Built in the early 26th century BC during a period of around 27 years, the pyramid is the oldest of the Seven Wonders of the Ancient World, and the only one to remain largely intact. It stands at 138.8m high, each side of the base measures 230m long. The heaviest stone blocks weigh 80 tons! They were built 1,200 years before the rule of King Tut. It is said that it took 100,000 men twenty years to build the Great Pyramid.

The Sphinx is found in both ancient Egyptian and Greek mythology. In Egyptian myth, the Sphinx was more of a symbol than an individual entity. It was a guardian figure, the protector of the pyramids, and the scourge of the enemies of Re, the sun god. It also represented the pharaoh and the pharaoh’s divine power. One question in particular poses a riddle to researchers – who mutilated the Sphinx’s face, and why? The star of those stories is Napoleon Bonaparte. It is believed that the Sphinx’s nose was broken during one of the French military battles near Giza, during the French campaign in Egypt in 1798. Prominent historian and author Bassam el-Shamaa published in 2009, that Bonaparte is innocent, and his supposed battle was at Imbaba, far away from the Pyramids and the Sphinx. He explained that the real reason for the nose breaking is erosion features, as the rock that Sphinx was carved of is somehow a new geological stone so it could be easily affected by natural erosion such as wind, rain and other natural disasters such as earthquakes.

We had some fun on the camels with the guides encouraging us to race them! Sadly, at the end of what was a wonderful tour, the guides completely reneged on the agreed cost and we ended up having heated conversation and paying more than what we had originally said we would..grrrrr.

We headed to the Nile Hilton Hotel for lunch – a welcome respite from the chaos that is Cairo – and air conditioning! Lunch was delicious and consisted of a buffet including mixed seafood, seabass, salad, delicious cakes and …sheep brains! Next stop was the Cairo Museum. An incredible collection of Ancient Egyptian artefacts but the Mummy Room was definitely the highlight! Scarily in tact with nails, hair and teeth visible. Another contender was the contents of King Tut’s tomb … His Mother was his Father’s sister. He took the throne when he was 8 or 9 years old. He married his paternal half sister. He suffered from a club foot, cleft palate and bone narcosis and had contracted several severe strains of malaria. His cause of deaths remains uncertain with speculation of a blow to a head which was later disproved and another of a fall in a chariot race which is unsubstantiated. The content of his tomb which was discovered by Howard Carter in 1922, was vast at 5,000 items and it is thought that most of this did not actually belong to him. There is a theory that everything connected to the Amarna period was simply put in with him to be buried and forgotten. The Museum did not have air con and was excruciatingly hot.

Our next stop was Khan el-Khalili, which is a huge souq and bazaar in the centre of Cairo. We bought the girls belly dancing outfits and Trent papyrus art. We enjoyed mint tea and they prepared an apple sheesh pipe (gross!!).

We had booked dinner at the famed “Abu Said’ restaurant. Lovely decor and you are able to buy alcohol (which is not always available). Slow service but authentic Egyptian food.

The Sound and Light Show was our final stop on the action packed Agenda of the day ….it was actually quite good. We got a taxi back and fell immediately fast asleep!

We overslept the next morning. Pete had been banging on the wrong door for 10mins before he realised! We had a rushed breakfast and took a taxi to Memphis which was the ancient capital of Egypt. Memphis is located south of the Nile River delta, on the west bank of the river, and about 15 miles (24 km) south of modern Cairo. Closely associated with the ancient city’s site are the cemeteries, or necropolises, of Memphis, and where more of the famous pyramids of Egypt are located. The Statue of Ramesses II is a 3,200-year-old figure of Ramesses II, depicting him standing. It was discovered in 1820 by Giovanni Battista Caviglia at the Great Temple of Ptah near Memphis, Egypt. It is made from red granite and weighs 83 tons. We also saw the second Sphinx which was carved between 1700 and 1400 BC.

It was VERY HOT! Charlotte was a bit grumpy! Our next taxi stop was the Saqqara Necropolis which contains the ancient burial grounds of Egyptian royalty. This 5 mile radius is home to the 4,700-year-old Step Pyramid, Egypt’s oldest surviving pyramid that’s about 200 years older than the more-famous Pyramids at Giza. It is also considered to be the world’s oldest stone monument. The site was used as a burial ground for more than 3,000 years. It is also home to the Bent Pyramid – Archaeologists now believe that the Bent Pyramid represents a transitional form between step-sided and smooth-sided pyramids. It has been suggested that due to the steepness of the original angle of inclination the structure may have begun to show signs of instability during construction, forcing the builders to adopt a shallower angle to avert the structure’s collapse. The Red Pyramid is named for the rusty reddish hue of its red limestone stones, it is also the third largest Egyptian pyramid, after those of Khufu and Khafre at Giza. It is also believed to be Egypt’s first successful attempt at constructing a “true” smooth-sided pyramid. We were allowed to climb this pyramid and got some great views of the desert. We were also allowed to enter the tunnel leading into it which is only 3ft by 3ft, so a squeeze! The tunnel went on for about 100m into a room which unfortunately smelt of wee. Our ‘guide’ meanwhile had led us on a merry dance throughout telling us that he was taking us ‘where no other tourists were allowed to go’ … ho hum..more baksheesh!! LOL. We were starting to get their measure!

We then headed to the railway station to check that our train tickets for the evening from Cairo to Aswan were indeed 1st Class and that we had not been duped (In China we bought ‘first class’ and ended up on slates with thirty other people!). We had a fairly comfortable 12 hour train journey to Aswan, only interrupted once by a drunken man shouting “Open Sesame’.!! We had dinner on board and poor Trent got the runs. All in all quite a fun experience.

Go Back to Egypt 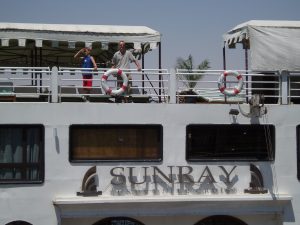 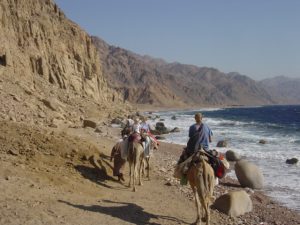 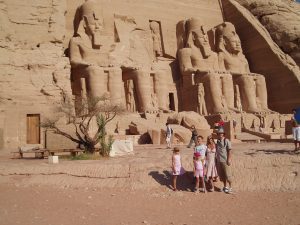