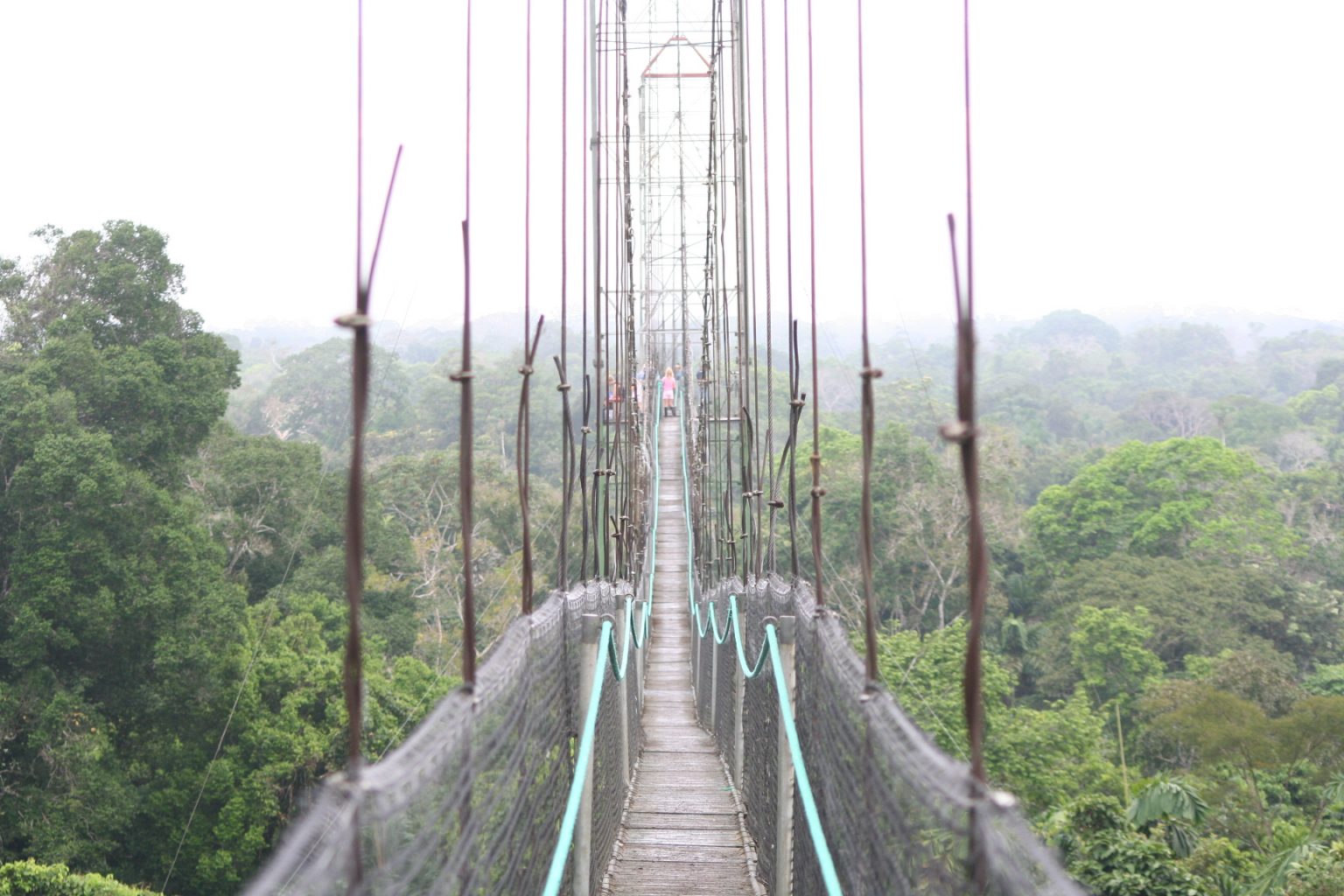 This rustic Lodge is located deep in the Amazon basin perched on the edge of a black water lake called Pilchicocha in the heart of the jungle. There are many features which set it head and shoulders above other lodges in this part of the Amazon: the scary 36m high, 245m long suspenscanopy walkway, Kapok Tower, parrot lick and butterfly house to name a few. An unforgettable stay with the opportunity to spot incredible insets (tarantulas, bullet ants) ,marvellous mammals including sloths, caimans, and fascinating birdlife covering macaws, toucans and hoatzin as well as fishing for piranha ... true adventure!

🙂 We LOVED the location, the rustic accommodation, the activities – FANTASTIC experience.

🙁 The hangover following the free pour gin and tonics on the last night!

Up at 7am for a leisurely breakfast and headed out to quickly buy a small backpack for $15. Headed off to airport – and crashed with another car! Clearly a common occurrence as no one appeared perturbed and off we went. We boarded a small plane (x2 seats and x1 seat) and flew into the Amazon. It was really sad as evidence of deforestation was clear from the sky.

We had lunch on the river and then headed off in a small motorised boat.

We arrived at the lovely Sascha Lodge which is set in 5,000 acres of pristine rainforest. All of the cabins are thatched with shaded terraces and hammocks to relax in.

After arrival at the lodge we embarked on a boardwalk. We first heard and then spotted the howler monkeys in the canopy. There were loads of massive bullet ants – if you get a sting from their tail you will suffer from a 24hour fever!

Once we got to the end of the walk we were poled back to the lodge in a canoe (reminiscent of the Okavango).

We then headed to the Balsa which is a relaxation area in a lovely open plan setting above the lake where you can spot birdlife and caimans.

We then headed to the lake where we had a swim. Paul hates black water and refused to go in. We spotted a small caiman while swimming! We had a fantastic guide called Jose ands met a lovely American family called Gary and Diane and their 4 kids. Spotted terrapins lurking beneath the laguna. Jose got out the telescope and we did some star gazing – stunning!

Woke up at 4am and then fell back asleep. Alarm went off at 5.30am. Delicious breakfast of pancakes and fruit and scrambled eggs. We all had the runs! Set off to do the famed canopy walk.

Everyone exhilarated and loved it – I was terrified! Paul also admitted afterwards that even he felt nervous. Spent an uneasy few hours searching for birds – spot billed toucans, Great Many banded Aracari, Ivory Billed Aracari, Channel billed toucan, white throated toucan, maroon bellied parakeet and opal crowned tanager. Several howler monkeys. The birders refused to move out of our way when we past them – Twitchers! Caitlyn was rocking the canopy – eeek!

Being back on terra firma was wonderful! Donaldo, our indigenous guide spotted a tarantula under a log along with millipedes and other larvae and beetles. Fascinating. As an entomologist this was pure heaven for me! The frogs and fungi were equally interesting.

We headed to the butterfly farm which we thoroughly enjoyed, The gold pupae reflected us back! This is one of the largest butterfly houses in Ecuador with 40 different species born and bred here. These include glass wing, blue morphs, tiger longwings, bright yellow swallowtails and giant nocturnal owl butterflies. Thoroughly enjoyed this excursion.

We headed back to the lodge for snacks which we took along with us to the deck for piranha fishing. While piranhas have a reputation for being ferocious man-eaters, they rarely attack and hardly ever kill humans. Red-bellied piranhas are the most aggressive and have been known to bite humans in the dry season, when food may be scarce, but these attacks are usually not fatal. Trent managed to catch a red bellied piranha and Paul caught a star bellied piranha. Cailyn caught two sardines. A little boy caught a terrapin which was not that pleasant to watch when they pulled the hook out – poor thing. A loud American woman (originally from SA was talking at the top of her voice saying that we should fish elsewhere to let her son swim – but Jose had told us to fish here and that he shouldn’t be swimming where we were fishing.)

We then headed to the spot where we could and did swim before enjoying an excellent lunch. We all chilled on our hammocks. Paul and I had a nap which annoyed the kids so they woke us up for another swim. Bought some t-shirts.

At 4pm we headed off for a walk which started with a canoe trip. Spotted some spider monkeys and lots of insects.

We then headed back for dinner and it started to rain but we persisted with going out in the canoes to search for caimans in the dark. The girls were a little scared but it was such fun and they ended up loving it! We did see a caiman and some turtles. We glided through an eerie swamp forest and spotted one more big caiman. The rain became more intense as we headed back and were in bed for 9pm.

Up at 5am and enjoyed a hearty breakfast before heading off to the Yasuni clay lick which is a short boat ride away from the lodge. Flocks of parrots, macaws and parakeets gather in the early morning – an impressive sight.

As we set off we saw four hoatzin – SO excited as was bucket list! This so-called ‘stink bird’ reeks of fresh cow manure or sweet-smelling hay, because of its unusual diet. The bird has a special digestive system that ferments vegetation as a cow does, which enables it to eat leaves and buds exclusively. Genetic research published back in 2015 concluded that the hoatzin is the last surviving member of a genus of birds that branched off and evolved separately about 64 million years ago, around the time the dinosaurs became extinct. They are poor, clumsy flyers, especially in their early days. Hoatzin chicks are incapable of flight until 60 to 70 days after they are born. That’s a long time to be vulnerable to predators. Luckily young hoatzins are equipped with claws on their wings, which they can use to climb branches. The wing claws disappear as the bird matures. Fascinating stuff.

The canoe trip to the parrot lick was 30mins. We forgot our cash but they let us in anyway – $25 each! Saw mealy amazon macaws and blue headed macaws. The parrots gathered in huge numbers and then disappeared as quickly as they arrived only to be replaced by another flutter of birds. They use the lick which is full of minerals each day to detoxify their systems from all the fruits and seeds that they eat. Amazing to witness.

When we left we saw a bullet and and a tarantula engaged in a fight!

I got stung on the buttock by a scorpion and it kept pulsating much to everyone’s amusement! Donaldo then showed us the ‘make up’ of the Amazon and the kids took great delight in painting our faces!

We headed back via Donaldo’s home in the Amazonian jungle to meet his family: wife and 7 children! They live very simple and pure lives off the land which they have purchased a share for a $600 stake. This buys a 250m water front abode and is protected by the community. He taught us how to use a blowgun which they use for hunting for special occasions when they eat meat. Paul and Trent both managed to hit the papaya. The people are governed by their chief and elders. Rape + Death. There is no crime as theft results in being banished into the jungle where one is unlikely to survive without the support of the community. It was a lovely visit. They gave us some fermented coca to chew (from the cocaine plant) – yuck. We all agreed that it was a lovely authentic visit and felt privileged to have witnessed their humble but happy home life.

Spotted squirrel monkeys on the way back. Swam in the lake and relaxed until lunch which was as delicious as ever. Had another nap before everyone went off to do more piranha fishing as the kids had been begging to do again. Everyone caught piranha and Charlotte caught a sardine. Caitlyn had used a leaf to fish for the piranha as she was told that they are herbivores – cute! I relaxed on the hammock while they fished and enjoyed the smells and sounds of the jungle. There were squirrel monkeys playing in the trees right next to me. Paul and kids saw a water snake on the way back.

We then headed off in the canoe back into the swamp forest. We then took a walk and headed to the observatory tower which is in a kapok tree. Climbing the kapok tower is equally exciting and standing in the highest point of the tower at 100ft is exhilarating – the kids kept throwing seeds at me! The tree grows to 200ft tall! Saw a flock of macaws. Great views.

We then headed for a walk and did the phufee slide which the kids loved! Caitlyn nearly fell off! We saw thousands of bats emerging as we headed back as well as a a caiman. We enjoyed swinging from the kapok tree.

After an excellent dinner we headed off on an insect hike – as an entomologist it was absolutely fantastic! The biodiversity is just incredible. Every step yielded different species. Loads of crickets, tarantulas, frogs, cockroaches, wolf spider and much more…

After the walk we put the kids to bed and met Jose at the bar for farewell drinks – well, far too many free pour gin and tonics we fell into bed!

Up at 6.30am with hangovers from hell! Couldn’t move or pack so missed breakfast. Long boat journey back to Coca. Jose gave us a CD with loads of excellent photos. Once in reception Paul got the message from Julian that his Mom had passed away peacefully in her sleep. We were very sad. 🙁

Flight back to Quito and back to La Rabida. Visited the Equator Museum feeling like death due to the pollution and noise and hangovers. Did the experiment to see whether water flows straight down the Equatorial line, anti-clockwise N and clockwise S. Trent & Pete put the egg on the nail and got certificates! We were later told there is a dimple! Went to Mall to buy Lukas a football shirt. packed, dinner, bed – noisy locals fighting in street disturbed our sleep.

Go Back to: Quito

Go to: The Galapagos 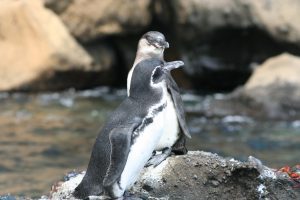 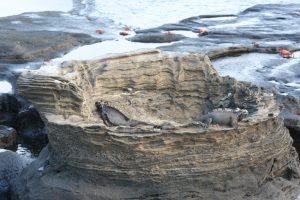 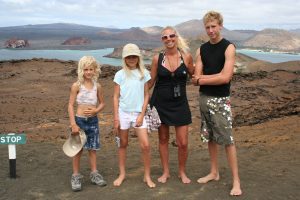