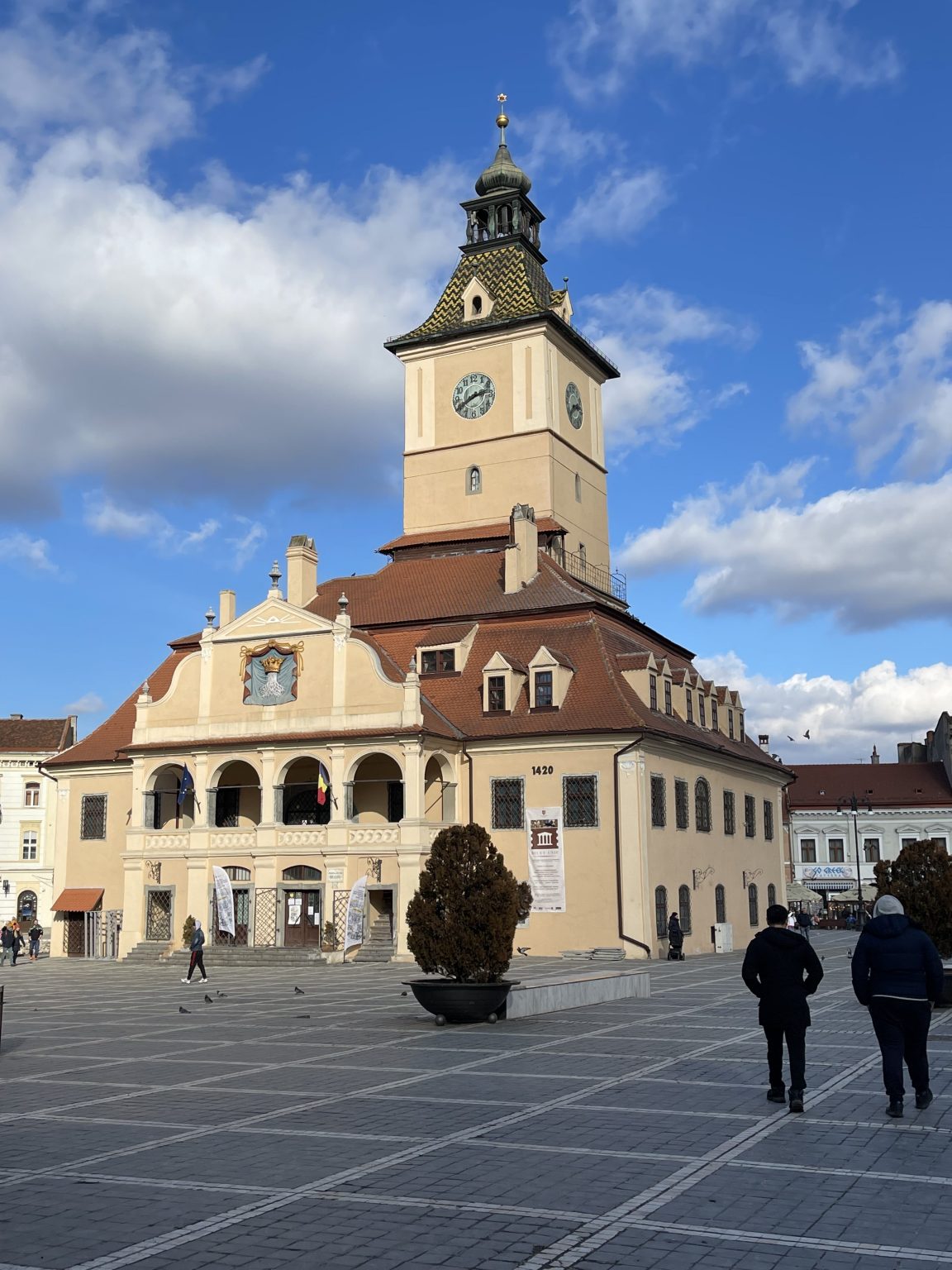 🙂 Affordable and is up and coming and recovering from its difficult history.

🙁 Bucharest retains the evidence of its communist past and is a bit derelict in areas.

Bucharest was dubbed ‘Little Paris in 1900 because much of its architecture resembled the French styles. Locals greeted each other in French and wore Parisian fashion and studied in the French Capital. As we headed into the City from the airport we spotted the Arcul de Triumf which is a replica of the Arc de Triomphe and was built to celebrate Romania’s victories in WW1. Currency: Romanian Leu but Euros widely accepted.

For our Valentine’s short weekend break we booked the affordable Filitti Boutique Hotel which is centrally located and next to the Old Town which is probably the youngest Old Town in the world being less than a decade old! Unfortunately due to Covid the rooftop bar was closed (may have been a good thing as this was right next door to our top floor room)! We headed into the Old Town through a fairly derelict area to reach a number of restaurants lining the road. We ordered Mici (grilled Minced meat rolls) and Mojitos.

We were up early the next morning as we were collected by our guide Florin, from Tour For Locals. Florin was friendly and knowledgeable. We headed out of Bucharest into the country. First stop was Peles Castle situated in Sinaia, which is a ski town 80miles north of Bucharest. It is extremely ornate with plenty of wood and was built by the first King of Romania, Carol 1st and completed in 1883 and served as the summer residence for the Royal Family until 1947. It does look like the building is suffering from subsidence which is a shame.

We stopped for some food and mildly entertained by the naming protocols.

Our next stop was in stark contrast to the opulence of Peles Castle: Bran Castle was built between 1377 and 1388 on a strategic site overlooking the heavily trafficked mountain pass between Transylvania and Wallachia, the land over which Vlad the Impaler ruled in the 15th century. Also known as Vlad III Dracula, the ruler is widely believed to be the inspiration for Bram Stoker’s Count Dracula due to his historic bloodlust. He liked to torture people and would impale his enemies on the battlefield to deter his other enemies.

We stopped off at the little market selling Chines bric a brac and ordered a gluvine and jerky.

Our final destination for the day was the medieval town of Brasov, capital of Transylvanian Saxon is located 166Km from Bucharest and sits at the base of Mt Tampa. Its picturesque cobbled streets make it ideal to explore on foot. The Black Church on the square dates to the late 14th century.

We also discovered the narrowest street in Europe: Strada Sforii (Rope Street). It was originally a fire escape.

We enjoyed a pizza on the square before the long drive back to Bucharest.

The tour had taken thirteen hours as there was a lot of traffic from the ski resort so Florin dropped us at L’Atelier for 21h00. We were exhausted but the food and local Romanian wine followed by a shot of Bran was good.

Another bright and early start. Today it was a private food tour booked via Viator with Diana and Cristian. They also have a business called Unzip Romania Travel – who also offer reasonably priced day tours from Bucharest. The reason that we enjoyed this tour is that it combined being driven around which is very useful as sights are spread out for sightseeing in Bucharest as well as including food. The Bucharest National Opera House is an ornate, classic old world venue with wonderful acoustics.

The People’s Palace or Parliament Palace is the 2nd largest administrative building in the world (after Pentagon) and is former dictator, Nicolae Ceauşescu’s most infamous creation with 1000+ rooms and a surface of 365,000m2! Most of the buildings are not in use and many people’s homes and communities were destroyed to build this monstrosity.

Revolution Square is in the centre of Bucharest and is filled with Romania’s darkest history and the place where Romanians celebrated the nations’s independence from Communism and is a fusion of 19th-century palaces and socialist-era buildings.

The centrepiece of the square is the 25-meter Memorial of Rebirth. It honours those who fought to overthrow communist dictator Nicolae Ceaușescu. On south side of the square is a statue of the late politician Iuliu Maniu. He opposed the communist government and died in prison after being given a sentence of life with hard labor.

Framing the square’s east side is the Senate Palace, formerly known as the Central Committee of the Romanian Communist Party. It was here that Ceaușescu, along with his wife, fled from rebelling citizens at the onset of the revolution.

On the opposite side is a majestic neoclassical palace built between 1812 and 1820 as a royal residence. Today, it houses the excellent National Museum of Art of Romania. Its two permanent collections showcase national and European art. Browse works by Constantin Brâncuși, Claude Monet and Rembrandt, among others.

Another striking landmark, the Central University Library, overlooks the northern edge of the square. In front of it, see an equestrian statue of Charles I. It’s a replica of a statue created in 1930 and demolished by communists in 1948.

Bu now we had worked up a healthy appetite and headed off for lunch and sampled delicious local Romanian dishes.

For desert we headed to a takeaway! Yum. The cherry drinks were yum!

If that wasn’t enough – cakes and coffee!

We said farewell and headed off to the Muzeul National al Satului Dimitrie Gusti – entry is only Lei 20 – less than £4 which is great value for this amazing place. The museum “recreates three centuries of the Romanian village” in a Bucharest green space. Displays include 346 houses and over 53,000 objects, including peasant homes and technical installations. Households from several Romanian historic regions – Transylvania, Dobrogea, Oltenia, and Moldavia – are represented.The Maramures wooden church is the highlight. Gravestones often depicted a caricature of the deceased with a humourous poem about their lives! The buried houses were also very interesting. A MUST DO! There was a crazy cat lady feeding all the stray cats.

We had been told about the Cărturești Carusel Bookstore which was not far from our hotel, so we headed over for a browse across its several floors. It certainly is the most expensive bookstore I have ever entered but we did enjoy a glass of wine on the top floor watching the world go by.

As if the day hadn’t been filled with quite enough food and wine we then headed off to the famous Carcu cu bere. It is housed in an architectural monument built in 1899, and is included in the list of historical monuments of Bucharest. The exterior of the building is remarkable and the frescoes, antique furniture and decorations of the interior all add to the wonderful atmosphere of the restaurant. There is folklore dancing and the traditional dishes are generous and delicious. I had read about poor service, but we had a very positive experience and the pork was very good. We also tried the papanasi – divine Romanian desert – farmers cheese doughnuts, that are served with sour cream and cherry jam – Yum!

We did miss this Instagram umbrella moment as it was winter…but this is what it looked like instead.

Wow. That was an action packed two days. Do we love Bucharest…well, not so much…. this City certainly has the scars to prove it has been through tough times and in between the communist remnants hope is sprouting…We are told that the Danube Delta is pristine and worth a visit… perhaps…. 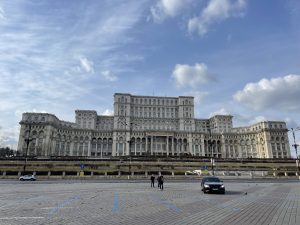