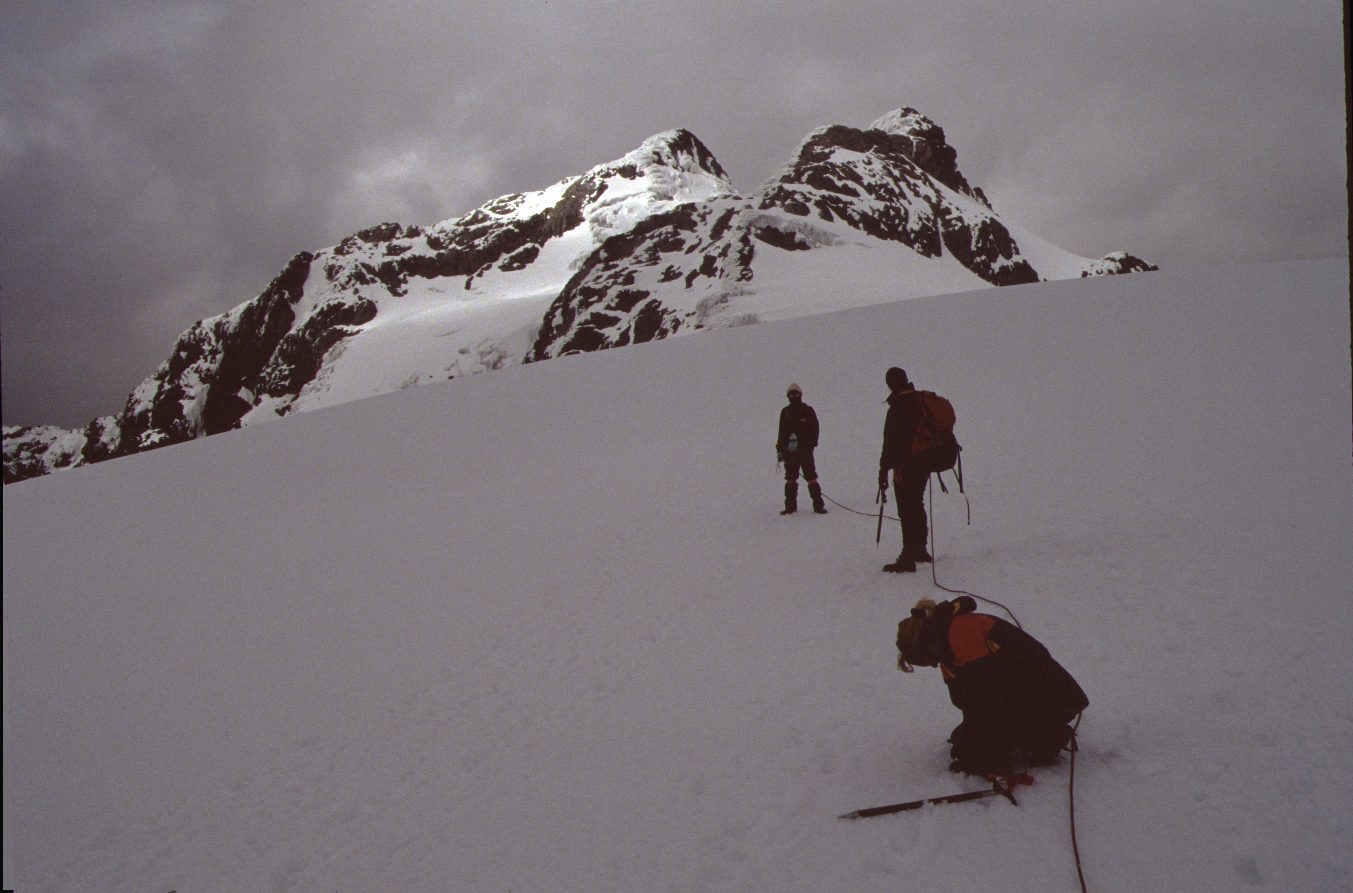 The Rwenzoris, often called the Mountains of the Moon, lie on the Uganda DRC border and mark the frontier between the high savannah plains of East Africa and the low dense forests of the west. It is a true mountain range covering six massifs. The highest point in the range is Margherita Peak on Mount Stanley at 5,109m is the 3rd highest point in Africa after Kilimanjaro and Mount Kenya.

🙂 Third highest peak in Africa. Sunrise above the clouds after crossing a glacier! Giant plants.

🙁 Money paid does not appear to be invested into maintaining the huts.

The Rwenzoris are not volcanic in origin. They were formed by an uplift associated with the formation of the western branch of the Great Rift Valley. The explorer Henry Stanley was probably the first European to see the mountains when he explored the region around Lake Victoria in the 1870s. Even today they are relatively unknown and retain an air of mystery and remoteness. A demanding trek, crossing a glacier and technical climb to reach the summit – a very satisfying experience.

Recent Update (March 2021) on climate change and its effect on the Rwenzoris.

Our tale starts during our travels around the world while we were in Africa on 18 December 1994. We had just completed an incredible stay at Bwindi National Park where we had the privilege of tracking gorillas through the impenetrable forest. We had the privilege of spending time with a group of six great apes. We saw the silverback male first – he came really close but the foliage made it impossible to photograph him properly, although we did get video footage. We also enjoyed watching a small baby with his mother. We made a deal with our driver Sadie, who drove us back to Kasese that evening so that we could check in and pay for our Mountains of the Moon Trek the next morning.

As Sadie was driving us we had often noticed hundreds of people walking on the side of the road with what seemed to be their homes on their heads. There were also massive traffic jams. It was only afterwards when we had access to news that we realised that it was in fact people fleeing from Rwanda during the genocide.

We were up at 7am on Monday morning and Sadie took us to the RMS (Rwenzori Mountain Services) Office. We then had a surreal experience. There was no foreign exchange available at the two banks in town as they did not know what rate to use and could not get through to their Head Office in Kampala. The Foreign Exchange Office had run out of money. RMS would not accept travellers cheques. Finally after begging, pleading and tipping … two hours later we emerged with an armed guard accompanying us from the bank to the RMS with a sack of Ugandan Shillings equivalent to $800 US Dollars. By now we were too late to start the trek and our hotel made us pay 50% more as we checked out so late. Welcome to Africa where you cannot rush as everything is African time!

Up at 7am and had a warm shower – with a cup! Weighed in, although we were not taking porters and carrying our own backpacks. Paul’s rucksack weighed 20Kgs and mine weighed 15Kgs! To reduce costs we had agreed to pair up with another couple who were from Scotland called Bob and Tina. It was a tough slog and the bush was extremely dense. Our guide very kindly swapped his 5Kg rucksack with mine when I started to feel quite faint and life seemed rosier and I got a second wind, much to Paul’s annoyance as he struggled with his 20Kgs! Chocolate biscuits made us feel better! Stopped for hot soup for lunch (we were also catering for ourselves to make it affordable as the costs to climb are so extortionate). We met two Austrian mountaineers who were running up to Margherita Peak!! Arrived at the hut in 4 hours. Paul made pasta, tuna and beans which was delicious. Saw a giant earthworm! Erected our tent and we slept like logs.

Woke up at 7am and took the tent down while Paul made oats. Today is said to be the most challenging day of walking of the trek. Set off at 8am – tough but enjoyable. Paul had a nosebleed. John our guide swapped rucksacks with him for a while. He suggested to Paul that he would charge him the same as a porter would and Paul took his rucksack back! As we got higher the vegetation changed. Huge tufts of heather on the trees, moss on the cliffs and weird plants in the bog made for a very mystical setting. We almost expected to see goblins peering out at us from the giant lobelias and fairies hiding in the massive fronds! Every now and again there was a fragrant whiff in the air. Where the vegetation was particularly dense you could see vapour in the humid air as you breathed out! Got to the hut at 2pm – 6 hours walk. Bathed in the river which was icy cold but so refreshing. Put the tent up, ate some soup and relaxed. Th night sky was spectacular – the stars shone so brightly and we felt so content under the wide African sky sniffing the faint smell of wood smoke and listening to the gentle nattering of the guides. The following night we met a porter whose Father is actually John Matte – founder of the Mountain Club of Uganda.

Up at 6.30am – cold and frosty at first.Condensation on fly sheet had frozen! Once the sun rose above the mountains the air soon warmed – just beautiful. Porridge for breakfast and set off at 8.30am. VERY boggy! Walked through what looked like a prehistoric landscape of of moss covered trees criss-crossing by jumping on boulders and then on to giant heathers. Altitude was taking effect and walking was slow. We then climbed through dense rain forest next to a cascading river. Started to glimpse Mount Stanley glaciers. Truly spectacular and unforgettable. Walked through giant lobelias to arrive at Lake Bujuko. Finally after another half hour of moaning and bogs we arrived at the hut in a spectacular location. Pitched tent – warm sunshine .. bliss, except for feeling nauseous. Made dinner then spent 2 hours arguing whether we should zip our sleeping bags together or not!

Woke at 8.30am and had cereal for breakfast. Cold so lazed around until 11am and got ready for walk. Paul felt really ill – probably due to the malaria tablet (we were on Lariam at the time!). We walked up a steep hill for thirty minutes and crossed the traditional mountain border into Zaire. Our first impressions of Zaire as a country was that it was much the same as Uganda: green, misty. Tina noted that it was much drier. Bob cited a few “Bob facts” ie. that it was an inhospitable place, devoid of life and the sky was bluer. We did have a good laugh. Back to the hut for mushroom soup – yuck. Went for a nap and then made tea with the porters and guides. John, our guide had two wives and ten children! Taught Tina and Bob how to light their farts and then played a game of Bands beginning with the letter that the last Band ended with – great fun!

Christmas Eve! Up at 7.30am, cereal and set off at 10.30am. Food stocks at an all time low. Crossed even more bog. Bog fact – this is the highest bog in the world! Finally the bog ended and we crossed a ridge of stringy moss and wild flowers. Elena Hut is right at the snout of a glacier. Arrived at 1.30pm along with a BIG group of English people who had just summited Margehrita. One of them gave me a sweet – I was SO grateful. We made soup and spaghetti. Bob unwell and did an impressive chunder. Checked our equipment in readiness for the morning ascent and crossing of the glacier. My one crampon was too big and Paul’s was missing a strap. Restless night – Paul annoyed with John and Jimmy who talked all night while we were trying to sleep.

Merry Christmas everyone – and a white one at that! Up at 5.30am ready for the summit! Finished the last of our porridge. Sunrise on the summit spectacular! Often the clouds do not clear so people do not always get the view. Set off at 7am and arrived at edge of glacier at 7.45am. Roped up and put on crampons. Guides were wearing wellies! Paul and John’s crampons fell off. Steep and difficult and then evened off. Crevasses a deep blue – would not want to slip down one! The final ascent was on a rocky outcrop which was slippery and difficult. Once on top we briefly entered Zaire but it was freezing and windy there! Bob and Tina were helpful in belaying. It snowed, so we had a White Christmas! The cloud cleared briefly and we had spectacular views. Got back to our hut at midday, soup and set off for Kitandra. We had no food left at all but fortunately a Natural Action group had arrived who shared some of their food with us. Slept well.

Natural Action came though and gave us some porridge and a ham and tomato sandwich with chocolate biscuits – Thank You! We set off to climb the Freshfield Pass. Hard going but our acclimatisation had set in – coul dsee zaire from top. Boggy until we hit the stone path. Descended rapidly through bogs and rivers. Arrived at Guy Yoeman Hut and had set up camp before Bob and Tina arrived. Cooked donated rice, cabbage and carrots. Rest of group arrived and cooked a suckling pig! The aroma nearly killed us. They shared their leftovers with us and a glass of wine. We were so grateful! Really cold night in the tent.

Up at 7am and ate dry powdered wheatabix – thank god we had something to eat. I felt rubbish. John guided us through bog and steep descent. Paul twisted his ankle which made a strange sound. It felt sore at first, but after strapping it up it was ok. The bog worsened and the path became a stream. Rested at Nyabitaba Hut and then thunderstorm started. Paul’s ankle became worse, so John ran back to Village. I then decided to return to Ibanda and find help and left Paul. By 6.15pm he became worried but fortunately John had arrived with a torch and coke. and helped him cross the river.At that point 8 wiry mountain men arrived with a stretcher. They lifted Paul above their heads and proceeded to run down the mountain at pace. Scary stuff! Paul arrived in the Village after dark and at which point the entire village had arrived to collect their tips! We had not eaten since 7am so the eg and chapati at the Women’s Restaurant was very welcome! Bed has never been so welcome. 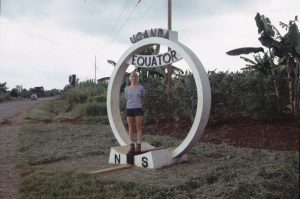