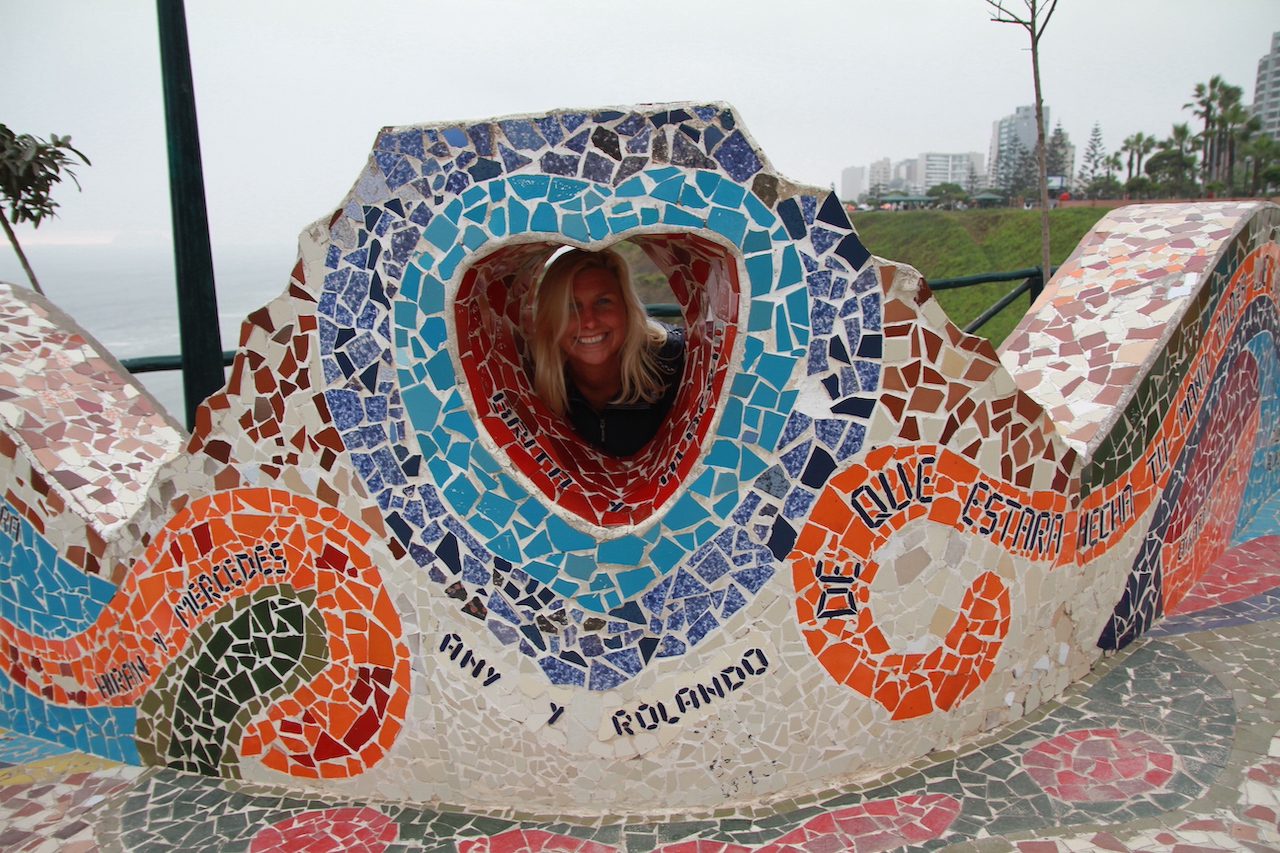 Lima, the capital of Peru lies on the country's arid Pacific coast. Though its colonial centre is preserved, it is a bustling metropolis and one of South America’s largest cities. After Cairo, this sprawling metropolis is the second-driest world capital, rising above a long coastline of crumbling cliffs. There is however a mist, the Garúa, which can deposit moisture on the ground.

Alarm went of at 5.15am. We took a taxi to Reading station and joined the 6.30am Gatwick express to the south terminal. Tried to exchange some of our foreign currency into smaller denominations but Travelex not interested. We had a bloody mary and scrambled eggs with smoked salmon and avocado for breakfast. Yum!

Flight was seamless – watched Hippopotamus which was hilarious and Churchill which was enjoyable. Landed at 18h30. Customs hot and busy! Collected by Haku Tours who I had most of the travel arrangements in Lima through and who were excellent as well as re-investing in the City’s impoverished community and with a social conscience.

The traffic was crazy and it tool 1.5hours to get to Second Home in Lima which had been recommended by my cousin after she stayed here. It is a well located guest house in Barranco (Lima’s art district – the owner (Victor Delfin) has a selection of art in his studio which adjoins the guest house). It is set on cliffs with lovely ocean views and our room was large and spacious.

We decided to head over to Ayahuasca Bar which is a two minute walk away and set in a colonial mansion building with a cool vibe and tasty cocktails and snacks. We enjoyed a couple of Pisco Sours – when in Peru – potent! The breaded prawns with a tangy mango sauce were delicious. We had a quick whatsapp call with Trent before going to bed – we had been up for a full 24 hours! Tony & Nessy’s flight had been significantly delayed and we heard them arrive at about 1.30am.

We were up at 7am. Took a few interesting photos around the property and played chess on an artistic sculpture.

Tony & Ness joined us at 8am for breakfast. We had granadilla like fruit which breaks open like an egg – delicious.

Haku Tours guide, Jean Paul collected us at 9am – Lima traffic and driving is hectic! We were off to participate in a Peruvian cooking class.

First stop was an authentic market to buy the food that we were going to cook. Tony made us giggle: all the chickens are splayed for display purposes with their fully formed eggs at the base of the cloaca – and he said, ‘Loo! They have stuffed an egg up the chicken’s ass’! LOL. Hilarious.

The cooking venue was a youth hostel in Mira Flores. We donned our chef hats and aprons and commenced cooking! I chopped beans and carrots while Paul and Tony shredded chicken and Nessy chopped onions and coriander and Parsley.

Nessy and I then mashed the sweet potato with our hands and mixed in chilli and lime. Cooked the potato without water in clay pots. We were told that there are over 4,500 varieties of potato in Peru!! Paul and Tony had in the meantime made the Ceviche (fresh raw fish cured in fresh citrus juices, most commonly lemon or lime).

Starter: Ceviche and Yucca with salt and Sweet Potato in layers with Quinoa and Avocado

We sat down and enjoyed chicha with plantain dips – one spicy chilly and the other mango. Chicha is a fermented (alcoholic) or non-fermented beverage of Latin America, emerging from the Andes and Amazonia regions. In both the pre- and post-Spanish conquest periods, corn beer (chicha de jora) made from a variety of maize landraces has been the most common form of chicha.

Our guide collected us and took us to see the Peruvian version of Christ The Redeemer – Cristo del Pacífico, “the Christ of the Pacific”, is a 37-metre-high erected in 2011. Its erection was a gift from a consortium of Brazilian companies to the city of Lima and described as a parting gift to the nation on occasion of the leaving of office of President Alan Garcia. There is also a cross to commemorate the eradication of the Shining Path terrorist group. The football stadium is a speck of green in the desert. Great views of the city from this point.

Next stop was wine tasting – the wine was very sweet! Plain pisco is horrific! There use to be 42 vineyards but these have all gradually been sold off as land to develop and the vineyard producing the wine we were tasting was a few hours away and owned by an Italian family (sadly the son had just passed away so there was a candle burning).

Haku then dropped us back at Second Home where we chilled for a while before we did a walk to explore the area. We were accosted by a group of school children who all wanted photos with us!!

We crossed the Bridge of Sighs which is one of the most famous landmarks in the Barranco District and is a lovely wooden structure spanning the Bajada de Baños, a stone walkway that runs down to the Pacific Ocean. Legend has it that a rich young woman falls in love with a street sweeper. Forbidden by her father to be with the love of her life, she spends her days sighing … it is said that if you can hold your breath while walking the length of the entire bridge, which is 144-feet (44 meters) long, your wish will come true….

It was really vibey walking the streets… so picturesque

We sat on the square eating sweet street food called picarones listening to music and drinking chicha. Picarones are a Peruvian dessert that originated in Lima during the viceroyalty. It is somewhat similar to buñuelos, a type of doughnut brought to the colonies by Spanish conquistadors. Its principal ingredients are squash and sweet potato. It is served in a doughnut form and covered with syrup, made from chancaca.

Stopped at the local brewery to sample a beer and bought Trent a t-shirt.

Headed back to Second Home for an hour to nap.

Next stop was the Water Theme Park – quite astonishing and surprisingly enjoyable and only $1 entry!! We took the children’s magic train around the park to get our bearings and then enjoyed all the water works – what fun!

Walked to Ayahuasca Bar for dinner and played pigs.

Up at 7am for breakfast. Had a quick look at the art on offer by Delfin in his studio but sadly way beyond our price range!!

Collected at 8am for tour of Shanty Town by Natalie who was a lovely guide. We started at the local market at the bottom of the hill and bought a clay pot.

Market intense and interesting – a medicine man was treating a woman with arthritis and she drank the most disgusting concoction imaginable! Yuck!

We visited El Salvador where there are 1m people living and were accompanied by Mr Romano who is an elder in the community. It was difficult to see how people can live in such poverty however, everyone had smiles on their faces – suffering really is a state of mind and these people were humble and positive and all had dogs!

We had asked what we could bring along as gifts to make a positive difference. Tony gave football t-shirts which the kids loved and we gave crayons and pens.

Had a wander around the centre which again was very attractive. Lunch was a quick but delicious street food snack.

The main drag was bizarre with loads of gruesome street artists – one with a chainsaw and a man’s severed head – it was frankly so shocking that I was gaping and did not take a photo! Headed back to Second Home but Guard was asleep so we had to ring the bell 3 times – paused and then another 5 times before he finally answered with groggy eyes! Had a nap and then headed out for dinner to Cala Seafood restaurant on the sea which was very good. I had ceviche and Paul had scallops and lobster – the pisco sours were great!

Landed back in Lima. Ness not feeling great. Haku transferred us to a new district: Miraflores – Tony and Nessy’s room much nicer and bigger – lol – luck of the draw! 🙂 We left Tony & Nessy to find a pharmacy and headed off to explore this new district.

We walked to El Parque del Amor … The Love Park is located on the cliffs of Chorrillos overlooking the Pacific Ocean. It’s surrounded by walls of romantic quotes in-scripted and where you can see people paragliding. Lots of lovers meeting up for kisses!

As we walked we heard our names being called – it was Elizabeth and Geoff on the highway way below us shouting our names – how funny!

Next stop was visiting Kennedy Park which is renown for all the stray cats that live there – we were not disappointed – they are everywhere!

Continued walking to the ruins and restaurant where we were meeting Tony and Nessy. Stunning! Huaca Pucllana or Huaca Juliana is a great adobe and clay pyramid located in the Miraflores district of central Lima, Peru, built from seven staggered platforms. We had a Pisco Sour while we waited for the Barrows.

The Huaca Pucllana restaurant has great ambiance and sits within the ruins spotlight and the food was excellent – best we had in all of Peru. The Llama was particularly good.

After an exhausting and eventful day exploring Paracas we headed back to Lima and for dinner at the famed Maido. We had the tasting menu which was pretty expensive at £350 for two of us. Pairing included beer and saki!

Go Back to: Peru 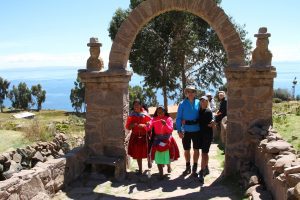 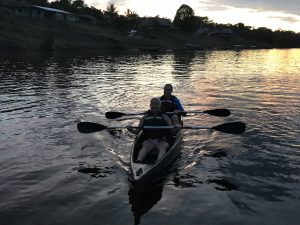