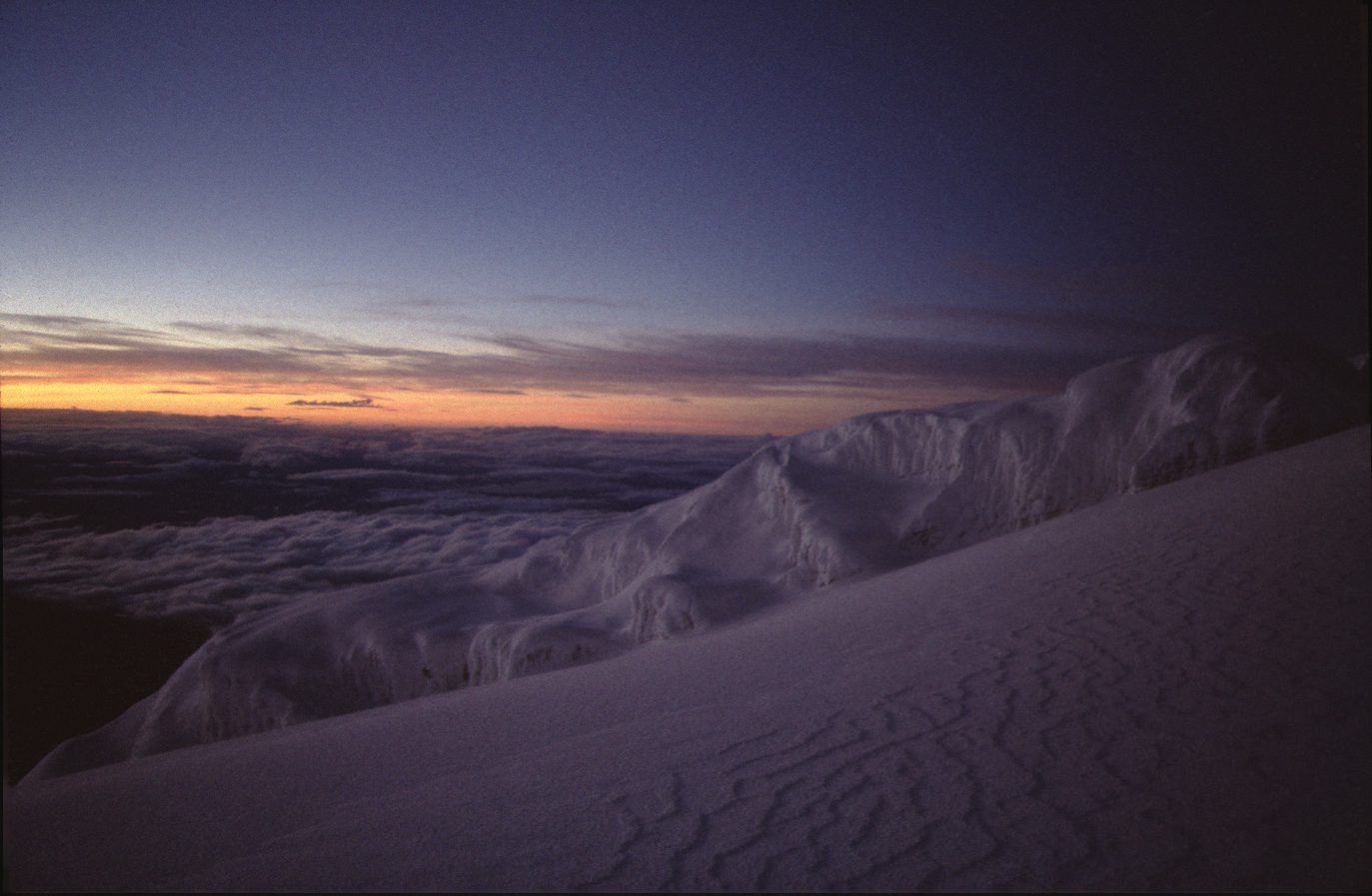 Kilimanjaro's huge snow capped summit dome rises high above the surrounding savannah. At 5,896m it is the highest mountain in Africa and the highest single free standing mountain in the world. It has three volcanic cones: Kibo, Mawenzi and Shira. The highest point on Kibo is Uhuru Peak - summiting Kili is an essential part of a visit to Tanzania!

During our Around the World trip we had intended to climb Kili after summiting Margherita Peak of Mount Stanley in the spectacular Mountains of the Moon / Rwenzoris in Uganda on Christmas Day in 1994. This is Africa’s 3rd highest Peak after Mount Kilimanjaro and Mount Kenya standing at 5,109m. Unfortunately Paul had twisted his ankle very badly on the last day on our descent and had to be carried down the last bit of the mountain, so we had to postpone our plans.

Fast forward to 1997 and our passion to summit Kili had only increased. We had persuaded my brother in law, Julian to join us on our adventure over New Year as he would be looking after the new addition to our family, Charlotte who had been born in November 1996 while we climbed and then he would attempt the summit the week after us. Our friend Paula also joined us on the trip.

We landed at Kilimanjaro International Airport in Arusha on the 27th December 1997. We were the last people off the plane and the only people to have a toddler just over a year of age. The Officials knew that their luck was in. They let Julian and Paula through without batting an eye lid but stopped us and asked to see our yellow fever certificates which we duly presented. They then insisted that Charlotte also needed to be given an injection, unless of course we had a “Christmas Present” for them. We handed over $50 and they then stamped a piece of paper that they had scribbled on. We went to the next counter and handed over the paper, the Official threw it in the bin and waved us on … Welcome to Africa.

After spending the New Year week in the Serengeti and Ngongoro Crater on safari, we checked into our hotel, where Julian would be staying with Charlotte for the duration of our climb. It was very comfortable with a swimming pool and friendly staff who could not do enough for Charlotte. Charlotte LOVED her food and every morning at breakfast Julian would be so embarrassed as she would start shouting “NA NA! NA NA!” which is African for food – the waiters would rush over to give her bread which would result in her contented silence! Charlotte actually took her first steps with Julian by the swimming pool when we were climbing!

Anyway, back to Kilimanjaro. Paul had done a lot of research and we did not want to do the so called ‘Coca Cola’ route. We had been in touch with a company called Roy Safaris who had been excellent in arranging all aspects of our trip. We had agreed on doing the Machame-Mweka route. This is the most scenic route on the mountain and passes through Kilimanjaro’s complete range of landscape and vegetation types. Due to the extra time and expense of this route it is much quieter and we only saw two other climbers for the duration of our walk. Although the distances walked each day are longer than on other routes, the gradual ascent offers the best chance of acclimatising properly. The summit stage is 15 hours and made even more strenuous by the effects of altitude and extreme cold. To further add to the challenge, this particular year happened to be an El Niño year which meant that there was also lots of snow on the final ascent. The trek took six days and five nights. Roy Safaris collected us on the morning of the start of our trek and we checked in to do the paperwork. As Trent was only 7 years old, we signed a form to state that we ‘did not intend’ to take him higher than 3,000m, as this was the rule for children under the age of ten. (Intentions can always change?!)

From the gate the path soon turned to dense mountain forest and then the heavens opened!Fortunately we had our rain gear and it was not cold. We continued walking into giant heather reaching the Machame Hut at 3,000m. There were two uniports in poor condition which the porters and cooks used. We erected our tents in the rain. We were completely soaked through – this is true tropical rain! The porters carried umbrellas but I don’t think that kept them dry at all! The backpacks which our porters had been carrying smelt and we put them next to the fire to dry out. We enjoyed a hearty meal and were soon fast asleep, weary from a full day of walking.

Before breakfast I went to have a bush bath in the stream which is about 30m down a steep slope. After breakfast we headed off across the stream following a path with red paint on the rocks. After about 2hours we reached a steep semi-circular wall of rock where we had a rest with spectacular views of the Shira Plateau and towers and pinnacles on the southern edge. It was a mysterious and misty day which rather suited our lunar surroundings. Paula and I had developed extremely dodgy tummies and had to make regular pitstops which, added to the altitude was making us weary. An hour we reached the flatter Shira plateau where we camped.

After breakfast we headed in an easterly direction towards the main peak of Kibo. We passed increasingly large boulders and then dropped into a broad valley which then climbed steeply on the other side to a ridge crest. The cliffs of the lava tower were visible. We crossed a very boggy section before climbing back onto the ridge. The path then dropped steeply into the Great Barranco Valley at 3,950m where we camped. Unfortunately on arrival at the camp site Paula was by now feeling really unwell. She had a terrible headache and we suspected that she was suffering from altitude sickness or cerebral edema. We took the decision that she should go back down and a porter assisted her. We were rather sad to see her go, but it was for her own safety and she felt dreadful. I was so grateful to be in our tent and go to sleep after a tough day!

This was probably the best day of the trek – we loved the scramble up the Barranco Wall and we were all starting to feel fitter. It took about an hour to reach the top of the Wall. The porters kept saying “Pula Pula’ – slowly, slowly! It was now that we could feel the sheer vastness of the mountain! The walk continued and dropped into the Karanga Valley after about two hours. After a final steep ascent of 21/2 hours we reached Barafu Hut at 4,600m. After we had an early night as we were waking up at 11.30pm to summit.

Did not really sleep and it was cold! Got ourselves dressed and headed into the black night with our headtorches! It was tough. Compounded by waist deep snow on what would in a normal year be a dry track. The porters head straight to the next hut but the two guides accompanied us – one for us and one for Trent in case he needed him. It was the most spectacular sunrise at the crater rim at 6am – a moment that stays with you forever. It took about 5.5 hours to get to the rim at Stella Point and we were COLD! We continued for another hour but by now Trent was turning blue. He insisted that he could continue to the summit which was only 500m above us… but Paul and I took the call that the Guide should take him down immediately as the snow was so deep that he could not continue to sink into it. We continued our slog and finally summited! We were so happy. Unfortunately our camera froze but we did manage to take two photos to prove that we got there before it stopped working. The wooden sign was completely buried under the snow but at least you could see the flag! We left the summit feeling very accomplished.

That was the easy bit out of the way! We now had to walk 12Kms on our descent to our resting stop! I found this the most challenging part of the whole walk. We headed down the steep gradient to the Mweka Hut where we had lunch The lenticular cloud formations over the mountain were awe inspiring. After lunch it was another 3.5 hours to walk back to the Village where we were welcomed by the locals. A round of beers to all Guides and Porters and Cooks who had done such an excellent job of taking care of us! As well as tips we also gave them our backpacks and jackets.

Once back at the hotel we met up with Paula and Julian and we had a day to relax by the pool for some R&R and great massages! Charlotte had taken her first steps with Julian while we were away! He then headed off the next morning to climb Kili himself. Unfortunately he did not manage to summit as there had been another massive snowfall and he was simply unable to navigate his way through the soft snow which was above his waist! The whole team turned back never the less, a great time was had by all and a fantastic experience to remember…. 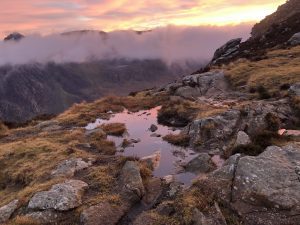 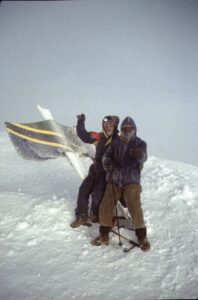