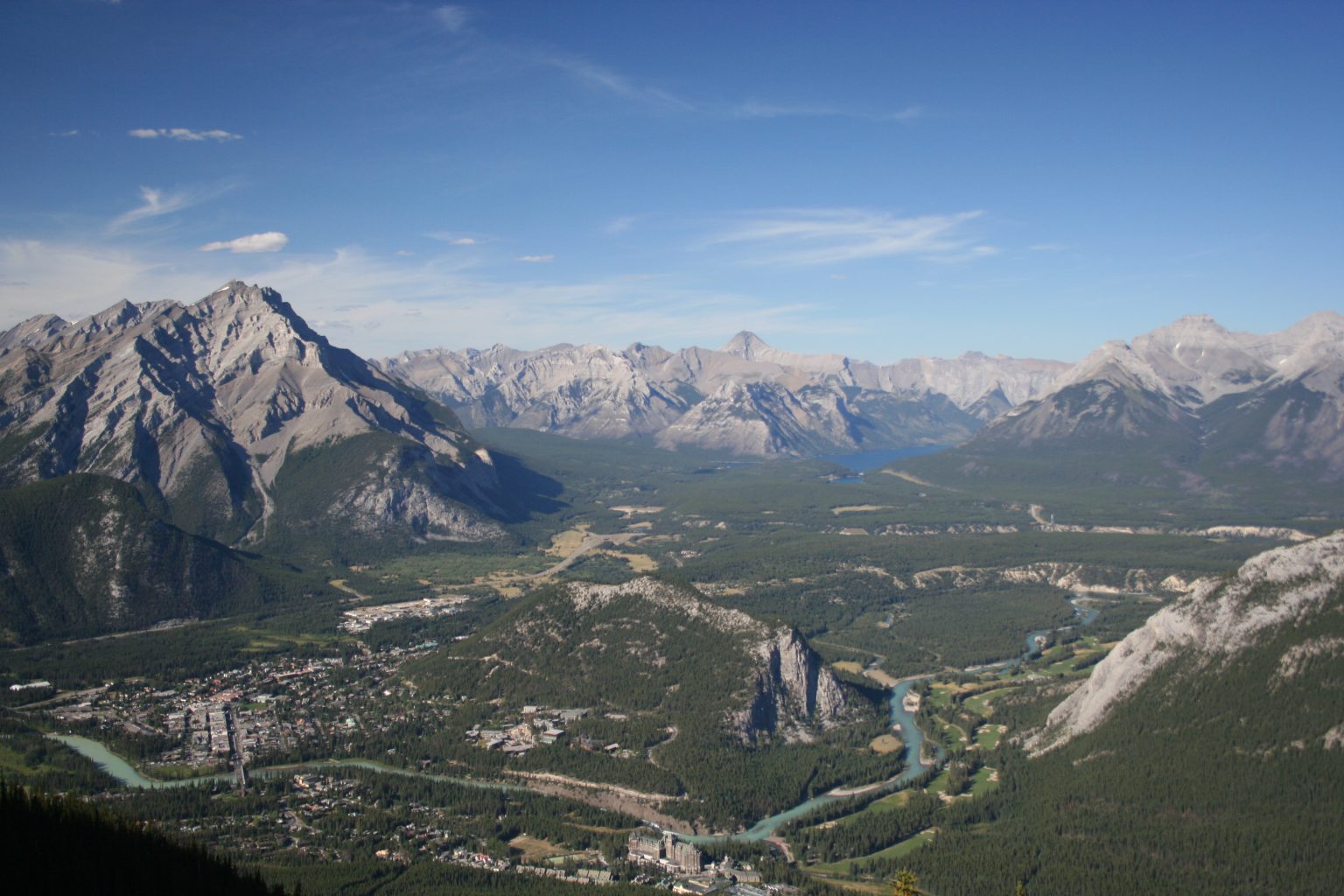 Calgary to Lake Minnewanka to Banff

Lake Minnewanka is a glacial lake located in the eastern area of Banff National Park in Canada, about five kilometres northeast of the Banff townsite. The lake is 21 km long and 142 m deep, making it the 2nd longest lake in the mountain parks of the Canadian Rockies. Banff is a resort town in the province of Alberta, located within Banff National Park. The peaks of Mt. Rundle and Mt. Cascade, part of the Rocky Mountains, dominate its skyline. On Banff Avenue, the main thoroughfare, boutiques and restaurants mix with château-style hotels and souvenir shops. The surrounding 6,500 square kilometres of parkland are home to wildlife including elk and grizzly bears.

Our train pulled slowly into Edmonton approx. 10 hours later than planned…. We then took a Red Arrow bus from Downtown to Calgary North (3hrs) – this is the most comfortable coach we have ever been on – reclining leather chairs, drinks and snacks delivered – watched Maid of Honour – not a bad journey at all!! We then collected our ENORMOUS RV! The chap was rather dull and took ages going meticulously through every detail – painful! 🙂 We were absolutely starving so headed to the first steakhouse we could see – it was AMAZING! To this day still one of the best steaks we have ever eaten anywhere on earth (including South Africa!): Ruth’s – Early on Ruth discovered a 500° plate with a pat of butter gave a satisfying sound and kept steak hot to the last bite. To replicate that sizzle worldwide, she would eventually put her chemistry background to work designing a proprietary 1800-degree broiler…. The Beijing Olympics was on in the background … the first bit of news we’d seen for a while! It was slow drive to Creek Mountain Village in Canmore where we set up camp at Spring Creek Village. We enjoyed a BBQ and chatted around the fire-pit until we felt too sleepy to stay up any longer ….

The next morning we were up early and headed to Lake Minnewanka. The indigenous Stoney Nakoda First Nations people called it Minn-waki (Lake of the Spirits) because they respected and feared the lake for its resident spirits. Early European settlers would later name it Devil’s Lake. Forests around Lake Minnewanka stir with wildlife, including mule deer, bears, wolves, elk, bighorn sheep, and an abundant birdlife population. If you’re searching for spotting some of the park’s famous wildlife, then a drive to the lake and its shoreline are a safe bet. The mountains towering over Lake Minnewanka are awe-inspiring and we spent the morning swimming and relaxing.

We went for a walk and spotted some bighorn sheep. The bighorn sheep is a species of sheep native to North America. It is named for its large horns. A pair of horns might weigh up to 14 kg; the sheep typically weigh up to 143 kg.  They have split hooves which aid in balance and rough hoof bottoms for natural grip. Their sure footing help them move easily around rugged mountain terrain.

We headed on to Banff!! SO exciting! We had prepaid a Gondola trip – from the top you can experience a stunning bird’s eye view of six Canadian Rockies mountain ranges!! It is open 7 days a week and located just 5 minutes from the Town of Banff, at the base of Sulphur Mountain.

We then headed to the Fairmont Banff Springs for drinks – we hope to revisit and spend a night or two here one day!

Our next stop were the Banff Upper Hot Springs. We parked next to a truck whose tyres were taller than Caitlyn! Located just a ten-minute drive from Cave and Basin near the base of Sulphur Mountain and the Banff Gondola, Banff Upper Hot Springs sits at the highest elevation of any operating hot spring in Canada. Pyrite and gypsum are two common sulphur-bearing minerals dissolved in Banff’s hot springs. The rotten egg odour (hydrogen sulphide) is produced when sulphate-reducing bacteria break down these dissolved minerals in the water before it surfaces. The natural temperature of the water that emerges at the Upper Hot Springs outlet varies depending on the season. During the winter, the temperature is as hot as 47°C (116°F). In the spring, the flow increases and the temperature cools off, to a minimum of 27°C.

We were pretty tired after such a full day of activity and headed to our RV campsite for the next two nights in Canmore called Tunnel Mountain Village 1. We chose this as we were allowed to have fire pits. The kids loved it and cycled around while we prepared a braai. Everyone fell fast asleep as soon as their heads touched the pillow!

The next morning we were up and enjoyed breakfast before taking a Rocky Mountain Float Trip – We launched at the base of Bow Falls near the Fairmont Banff Springs Golf Course. During our river journey, we travelled approximately 7 km down the Bow River past Bow Falls encountering excellent views of Sleeping Buffalo, Cascade and Tunnel Mountains. The water was chilly – 4C! We were transported back in an old fashioned American school bus – quite cool.

In the afternoon after lunch we cycled the Sundance Canyon Loop which is a fun, short cycle in Banff with footbridges and waterfalls. Banff. The 2-kilometre loop is accessed by accessed by a 3.3-kilometre paved trail (Sundance Trail) from Cave & Basin and is absolutely stunning and scenic around every corner.

Trent had slammed the door on Caitlyn’s finger the evening before we flew and had partially severed it. We were due for a check up so went to the local hospital. I specifically told the doctor which way to unwind the bandage as I had been instructed by A&E in the UK. He ignored me. Caitlyn was hysterical and nearly passed out from pain (as I did) when he pulled it the wrong way and pulled her finger back off. He then started asking me to sign an indemnity in case she had permanent damage and I would waive my rights to sue… I was FURIOUS The family actually heard Caitlyn’s wails in the car park! I insisted on seeing another doctor who stitched he back up, this time giving her a painkiller which previous doctor had refused and told me to take her to UK doctor in three weeks and not to open it up before….grrrrr

To cheer Caitlyn up we decided to treat ourselves to a meal out at the Grizzly House. Established in 1967, it began as a coffee house, a spot for the area’s artistic community to gather. Francis Hopkins, the restaurant’s co-owner, explained that his father-in-law Peter Stiener, the founder, wanted it to be a gathering place for writers and musicians. “That was the era for that,” “the late ‘60s. The kind of Beatnik, poetry, music, films, crowd.” It later changed to a disco, the first in Western Canada, bringing with it dancers and touring musicians.

And, as the story goes, music-lovers weren’t the only ones drawn to the restaurant. Inside of its rustic, almost ski-lodge-like exterior, the Grizzly House also earned “a reputation for attracting swingers.” The current-day spot winks at that history with its “For Lovers and Hedonists” tagline, as well as the 70s-era music playing through the dining room.

The journey from 70s swinger’s hotspot to its current-day iteration as a place known for its fondue and wild game gives another piece of the area’s history. Needing to sell food in order to keep its liquor license, the owners made a deal with the Chinese restaurant next door. The Grizzly House would provide the music, dancing, and drinks, while the restaurant would provide the food, which was delivered through a hole in the venues’ shared wall. When the neighbouring restaurant closed, Peter and his wife Barbara needed to figure out a way to keep selling food. As one of Banff’s many Swiss immigrants, Peter thought that fondue would be perfect, and he and other staff members brought in their own fondue pots starting a tradition that lives on today. Diners who want to get wild can try the restaurant’s selection of exotic fondues, which include alligator, caribou, and ostrich. For those who lean traditional, there are also more everyday offerings like chicken and beef. And as for those phones? They still work, and the back of the menu features a telephone directory, another nod to the spot’s swinging reputation. We had endless fun calling other tables anonymously and giggling till our tummies hurt! Trent ordered the exotic fondue which included Alligator, Rattlesnake, Frogs Legs, Ostrich, Bison, Stork and Elk!!!!

We were up early again and after a delicious breakfast we emptied the grey water from the RV – yuck.

We cleared up and departed the camp site which had been great and spacious with shade. We were highly excited to spot some bear poop on the way to our hike! It looked fresh!

The Hoodoos Trail is a beautiful hiking trail located in Alberta, Canada. The trail winds through a valley filled with hoodoos, which are tall, thin spires of rock that have been eroded by wind and rain. The trail is about 4 miles long, and it takes about 2 hours to hike the entire trail.

Go Back to: Silver & Blue Rail 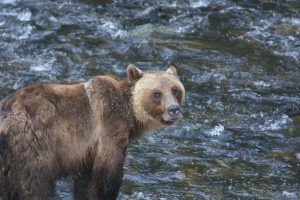 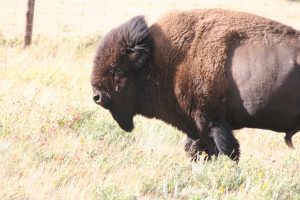 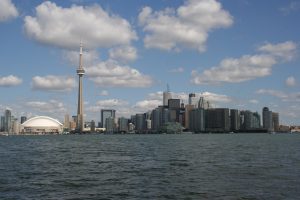